I don’t think I’m especially badly versed in 1960s films and pop culture history, but for reasons I can’t fathom I had never even heard of Privilege or of its director Peter Watkins until about a week ago. I find this particularly surprising given the subject matter of the film and the way Peter Watkins chose to tell it. Briefly stated, Privilege is a faux documentary set in the dystopian Britain of the near-future 1970s. Steven Shorter (played by Manfred Man lead singer Paul Jones), the world’s greatest pop star, is completely under the control of his management team who decide to collaborate with Britain’s new coalition government and the Church of England to turn Shorter into a messianic figure whose message is conformity and uncomplaining consumerism. During his transformation into a messiah figure Shorter starts to rebel; in that he is helped by a woman (played by the 1960s iconic supermodel Jean Shrimpton) who was hired ostensibly to paint his portrait but is actually there to provide female companionship while spying on him for his masters. 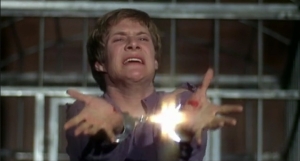 Put like that, Privilege sounds like a run of the mill 1960s ode to the counterculture, and it is to a certain extent, but Privilege isn’t just a quaint period piece. The movie is incredibly prescient about the issue of corporate and government cooptation of pop culture for its own uses. Steven Shorter isn’t just the object of Beatlemania-like devotion by his fans, he’s an extraordinarily powerful brand used to sell everything from apples to discotheques, kitchen appliances to weekly attendance at church. Aspects of Shorter’s commercial appeal and power that must have seemed outlandish to a 1967 audience don’t look odd at all in 2012.

One aspect of the movie that I found quite interesting — and I’d have to watch the film a few more times to want to really run with this idea — is that the Steven Shorter who dominates world pop culture at the beginning of the film is sort of an inverse Jim Morrison. Paul Jones’s good looks play a part in that, but his Steven Shorter is blondish and creamy skinned, vaguely effeminate and decidedly a masochist in his Theater of Cruelty stage act (that’s another thing: his act is a theatricalized spectacle) to Jim Morrison’s dark-haired, leather-clad, aggressively masculine sadist — or if not sadist exactly, top. But when his management team in consort with the government and the church coopt his image and change it to suit their own interests, Shorter’s persona becomes an actor rather than someone acted on. And certainly nothing could be more different from the handcuffed Shorter at the beginning whose song pleads with the audience to set him free as his own go-go boy dancers, dressed as policemen, beat him to a bloody pulp than the coopted Shorter at the end who gives a Nazi salute in his Nuremberg Rally-inspired arena rock show.

I loved how Peter Watkins directed the movie. Although it’s a fictional documentary — complete with cinema-verite-style footage, grainy blowups of stills, and so on — and despite the fact that some of it is quite funny, Privilege is not a mockumentary. Paul Jones is perfect in his numbed affectlessness and Jean Shrimpton is like Julie Christie’s younger and much prettier sister who can sort of act. The movie spawned one fairly major and one minor hit at the time (I remember the minor hit, “Set Me Free”, which was covered by Patti Smith in the late 1970s).

← Le clan | 3 Dancing Slaves [2004]
Ha-Buah | הבועה | The Bubble [2006] →
“This is the dialectic – there is a very short distance between high art and trash, and trash that contains an element of craziness is by this very quality nearer to art.” – Douglas Sirk

Looking for a name or title? 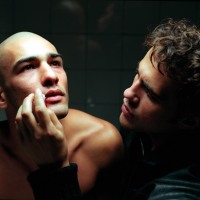 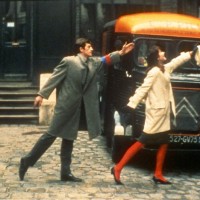 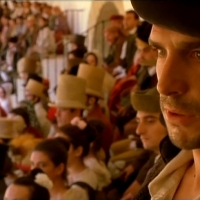